Disclaimer: I’m a core contributor on the Prism Protocol team.

In this proposal, I’d like to introduce the first cluster to synthesize and marry various Terra Ecosystem’s DeFi building blocks in a novel and mutually favorable way.

This proposal begins with Prism Protocol’s Prism Swap, then sets the stage for further integrations with Astroport, Mars, Edge, and others.

As a reminder, Prism Swap is a DEX that facilitates the trading and arbitraging of LUNA against its various Prism derivatives.

For this proposed cluster, various LUNA derivative pairs on Prism Swap are bundled together on Nebula Protocol and equally weighted.

This cluster would then enable cluster token holders to retain their full price exposure to LUNA and PRISM while also conveniently earning swap fees from a basket of positions on Prism Swap.

I envision this cluster being more valuable than the sum of its individual parts on Prism Swap, Nebula Protocol, and Astroport.

Previously, users may have been hesitant to LP the various pairs on Prism Swap due to fears of impermanent loss, unpredictable APRs, or the inconvenience of managing multiple LP positions.

However, once all pairs are bundled together in a cluster and automatically rebalanced by the target weights, user’s can enjoy their full exposure to LUNA, PRISM and also benefit from the volume of arbitrage flows and swap fees.

Since LP Tokens are auto-compounding, holders of the cluster will benefit from the yield associated with the swap fees occurring on PRISM Swap.

For Prism Protocol, the convenience of this cluster may lead to increased liquidity, which may subsequently scale swap fees and volume from speculators and arbitrageurs.

Additionally, the increase in yLUNA and cLUNA in the liquidity pools will generate more value capture back to xPRISM - relative to the yLUNA being utilized in regular yLUNA staking or the PRISM Farm.

On Astroport, the creation of the rLULP-UST LP pair will enable cluster holders to benefit from normal trading and arbitrage activity from cluster token rebalancing. Similarly xASTRO holders will benefit from the trading, arbitrage, and rebalancing of this cluster pair.

For Nebula Protocol, this dynamic cluster will generate fees for $NEB and $xNEB as the cluster is minted, burned, and rebalanced.

In the following example, let’s imagine the fictional user Otter Jimmy wants to utilize the Terra ecosystem to its fullest potential.

He wants to provide liquidity to earn swap fees and emissions but doesn’t want to manage the LP positions individually.

Instead, he buys the rLULP cluster token to receive exposure to LUNA and PRISM as well as earning the swap fees of the underlying LP tokens.

Next, he supplies liquidity to the rLULP cluster token by pairing UST on Astroport. Once this rLULP-UST LP is staked, he will also earn swap fees from users and bots that trade or arbitrage the token’s market value vs. intrinsic value.

Since this pool is beneficial for both Prism, Astroport, and Nebula - there is a probability that all three protocols may incentivize the cluster pending governance approval.

Instead of staking this rLULP-UST LP token, the user may be able to provide this LP token as collateral on Anchor, Mars, or Edge Protocol.

This type of implementation of a cluster of LP tokens is novel and first of its kind on Terra without much comparison.

In the following backtesting data provided by Alpha Defi, the PRISM-LUNA LP is compared against the rLULP cluster. As depicted, the Nebula Cluster appears to perform better than simply holding the PRISM-LUNA LP. Perhaps this is due to an increase in swap fees and arbitrage flows rebalancing into the worse performing pair. 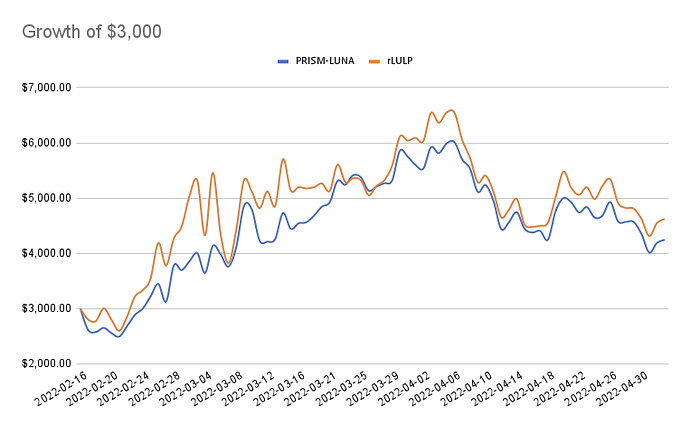 Perhaps another similar concept of an LP Tower or LP of LPs was introduced for Terraswap pools but hasn’t attracted many users and interest has diminished as Astroport absorbed most of the trading volume and has become the premiere exchange on Terra.

Additionally, clusters use price oracles and target weight oracles that are not constrained to a single exchange or proportion. This allows more flexibility on cluster makeup, how assets are weighted, and how the cluster adapts with community sentiment.

This cluster will integrate and extend the existing oracles from Band Protocol.

I like the cluster idea. Solves the big fear of impermanent loss. It’s like buying an ETF and it doesn’t matter if Coke is down 10% but Apple is up 30% you’re still making money.

Also could add more liquidity to all three pools which is a big win too.

However not a big fan of the cluster name. I want to suggest rLuna haha just so that we have another lettered luna, but that might cause confusion as well since it’s not a pure luna form. Let’s see if anyone else has better naming ideas.

Great proposal, the inclusion of LP tokens instead of just assets is a good idea from a yield-generation standpoint, and forces the creation of deeper liquidity as interest rises. This is basically allowing us to zap into 3 pools with a single tx which will make LPing across multiple prism assets simplified and therefore a lot more attractive. As a Prism holder, I approve even before getting into all the potential future integrations

Being able to collateralize LP is always a fun recipe for composability.

I am opposed to this proposal.

Two reasons: the inventory assets for rLULP are extremely concentrated in one address, and rLULP is too complex to be Nebula’s second cluster.

So why do these assets need a cluster when one address controls them all?

No one provides liquidity on Prism Swap, so one one holds the inventory assets for rLULP.

Reason two: even if the inventory assets for rLULP weren’t concentrated in just one address, this cluster is extremely complex. As Nebula is just starting off, its image and brand is extremely important. The idea of a cluster is already daunting for many users, which is why it makes sense to start with LUST. The first few clusters should be similarly simple, and their inventory assets should already be widely used. We need to gently draw people in, not frighten them off with complexity.

rLULP won’t be a good idea until: 1) more users express an interest in holding Prism Swap LP tokens, and 2) users grow more familiar with the basic concepts that Nebula introduces (in 3-6 months).

I will be voting against this proposal. 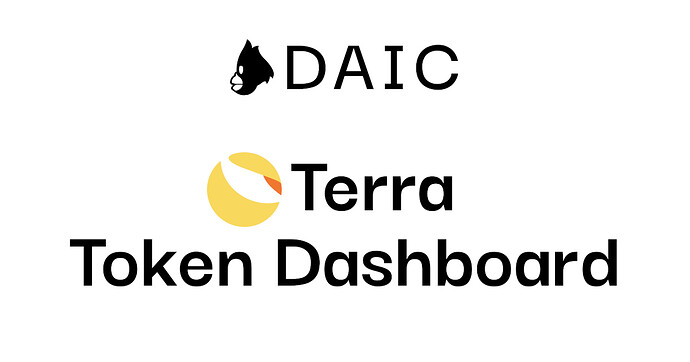 How to prevent getting dumped on by whales on Terra? This community tool provides a richlist for every CW20 token on Terra.

How to prevent getting dumped on by whales on Terra? This community tool provides a richlist for every CW20 token on Terra.

Does anyone have dates for these unlock start dates?

What month is “month 6” Core Contributors and Service Providers unlock?
•16,666,666 Prism unlocked each month for 18 months in a row

What month is “month 6” for Strategic Partners, Advisors and Collaborators unlock?
•5,555,555 Prism unlocked each month for 18 months in a row

First up, I disagree with the goal that this cluster reduce the reluctancy of LPs to participate due to impermanent loss, the cluster will still be subjected to the IL for both Prism & LUNA since the cluster is a technically cLUNA - PRISM (pLUNA + yLUNA = cLUNA). That being said, the IL for the cluster can be compensated with the high trading fees due to massive amounts of arbitrage opportunities present between p/y/cLUNA-PRISM pools whether in times of volatility or not.

While the reasons you’ve posted are factually correct that 1 address holds majority of the LP (my guess its Prism’s, since they’ve mentioned they’ll seed the pools), it’s independent of this cluster, I liken this cluster as a one-click zap into all 3 PRISM pools (p/y/cLUNA-PRISM LP). The decision to choose which LP to participate is not easy for most, therefore, this cluster allows them to re-balance their LPs accordingly. I would also emphasise that the LPs that participate in this cluster must be bullish on both LUNA & PRISM before they even consider pariticpating.

Back to your Reason 2, I respectfully disagree since Nebula is a protocol that strips away the complexity & auto-rebalances based on rules. While this cluster isn’t the easiest to understand, we shouldn’t underestimate the abilities of Terra DeFi users.

The information is only publically available on the blockchain:

However, retail investors need and deserve a chart.

I am perplexed that a project of this size and significance published a v2 Roadmap before publishing a white paper with a vesting schedule chart to replace the aptly named litepaper. 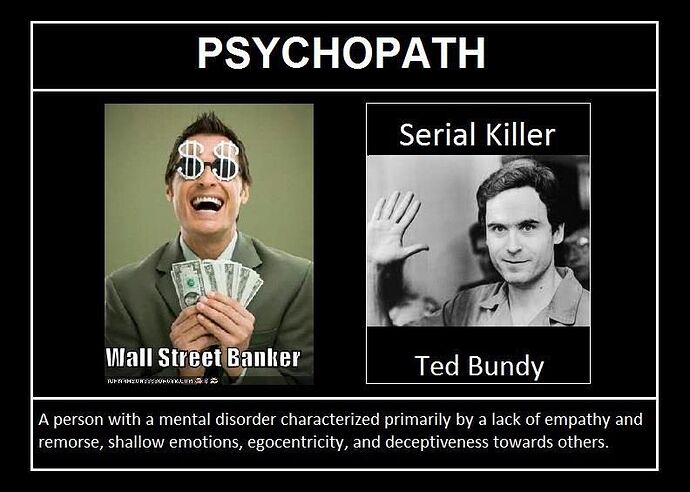 @lejimmy You have the answers to these questions. Please reply!